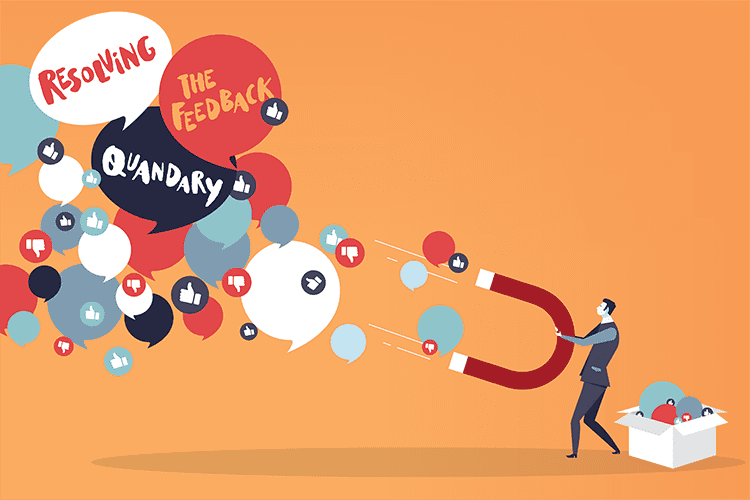 Let’s change the underlying philosophy and pattern of feedback

Do you want to create a culture that encourages extreme levels of candor, or do you heed the warnings of those who contend that feedback is a fallacy?

A reader of the current business press is confronted by two extremely different points of view regarding the basic question of whether managers should provide feedback to their direct reports. On the one hand we have those who advocate extremely candid, no-holds-barred conversations between managers and their direct reports, such as Kim Scott in her book “Radical Candor.” At the other extreme are those who advocate that the feedback process is bound to fail. Furthermore, it is based on false assumptions and, at its worst, does more harm than good. This is the argument behind Marcus Buckingham and Ashley Goodall’s Harvard Business Review article, “The Feedback Fallacy.”

Caught in this crossfire is the well-intentioned business manager who wants to do the right things for their direct reports and for the organization. As a senior executive, do you want to create a culture that encourages extreme levels of candor, or do you heed the warnings of those who contend that feedback is a fallacy?

Is There Really a Need for Feedback in Organizations?

We believe there is a wealth of evidence that the answer to this question is an overwhelming “Yes.” Productivity experts argue that organizations work best when feedback between colleagues flows freely. Best practices are shared, problems are resolved more rapidly and employees feel truly included.

One of the forces that retains people in organizations is their belief that they are learning and growing. Feedback from one’s colleagues and manager is one of the strongest elements of accelerating learning on the job.

Employee surveys invariably point out employees’ desire for more coaching and feedback from their manager. We never see employee responses that suggest an employee is getting all the feedback they want and need. To the contrary, there seems to be an insatiable desire for more.

In most organizations, there is some level of feedback, even if it is not as much as employees want. Sometimes when employees receive feedback, their feelings are hurt, and it appears to do more harm than good. Some employees only want to be praised and reinforced. Others say they don’t want to have “smoke blown at them.” They say they want corrective and redirecting feedback that they think will improve their job performance.

Organizations have sent the message that it is the manager’s responsibility to initiate periodic performance discussions. The broad assumption is that feedback should flow downhill. Rivulets of feedback should stream down the hierarchy. The reality is that they do not.

Many companies have decided to revamp their performance management systems by moving away from annual or periodic performance appraisals. Instead, they intend to replace them with more frequent performance discussions. Success to date in making that change a reality has not been great.

Fixing the Flow of Feedback

We propose a multipronged solution to this feedback quandary. Until now, most corporations have put nearly all of their attention on one fix, which has produced some change. But like most complex problems, the solution seldom requires only doing one thing. Several changes need to be made, and ideally they will occur concurrently, not in sequence.

1. Change the underlying philosophy and pattern of feedback. Rather than relying on managers to initiate all conversations, make it a two-way street. Remove the onus of responsibility and guilt from the manager. Replace the current “push” culture to include far more “pull.”

Next, convey the message to everyone, front-line associates and all, that if they wish to obtain more feedback from their manager and colleagues, they should ask for it. That simple act changes the psychological reaction that often occurs.

Currently, when a manager gives unsolicited negative feedback, the receiver’s brain often moves to a “fight or flight” state. The adrenal gland is activated via the sympathetic nervous system and releases the hormone epinephrine. This increases blood pressure and blood sugar and suppresses the immune system.

When a direct report asks for feedback from their manager, the likelihood of the above response is significantly diminished. The person receiving the feedback has both initiated and taken more control over the process.

2. Increase the amount of positive feedback. Feedback basically falls into two camps. Positive feedback includes messages of commendation about both effort and outcomes. It points out what has gone well and shines a light on the helpful behavior someone has displayed. It is always better when it is specific rather than general. It is easy to say, “Good job,” and “Well done.” It takes more thought and effort to pinpoint exactly what the person did that led you to offer commendation.

Negative feedback includes corrective and redirecting messages. These might include a critical reaction about what this person said or did, such as a comment they made that was inappropriate or incorrect; pointing out an action that the individual should have taken but failed to do; or identifying a behavior that they should stop doing.

We are not suggesting that managers shy away from giving negative messages to direct reports and other colleagues. The message is mind the mix.

3. Improve managers’ skills in giving and receiving all kinds of feedback. Our research has shown that while many managers see themselves as highly effective when they provide negative feedback (Figure 2), employees actually find their managers more effective when they give positive feedback or a combination of positive and negative (Figure 3). Of the 5,841 global leaders surveyed in Figure 4, more than 40 percent (2,369) of respondents give redirecting feedback but avoid giving reinforcing feedback — yet more than 72 percent of them rate themselves as highly effective at giving honest and straightforward feedback.

Providing feedback in a calm, even-handed fashion is a skill. And like any skill, it can be learned. Practice helps you improve. We submit that the best practice starts with asking for feedback from your direct reports. That single act telegraphs several important messages:

How the manager receives the feedback is a powerful teaching opportunity. If the manager exhibits a lack of defensiveness, along with a willingness to act on the feedback received, this sets a powerful example and can transform the culture of an organization over time.

Rather than yielding to the siren song of telling managers to give up entirely on providing feedback to their direct reports, we propose an entirely different course of action. By changing the fundamental assumption about this being solely the duty and responsibility of a manager, a major change would begin to occur. When asking becomes the starting point for the great majority of feedback interactions, the emotions change dramatically. When managers are the role models for asking for feedback, the entire process takes on a different tone. When everyone is encouraged to initiate the feedback conversation rather than wait for a manager to provide useful feedback, the tone changes even more.

When giving positive feedback is emphasized, feedback takes another step forward. And when leaders are more adept at and comfortable with providing feedback, the entire process takes on a new life.