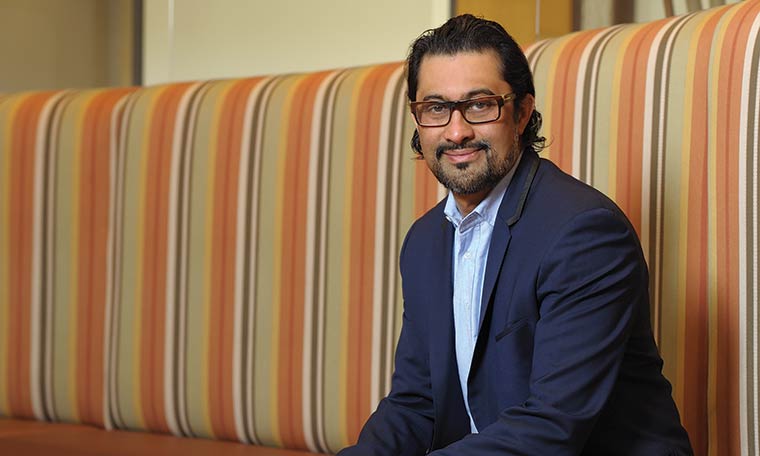 A Commitment to Move

Your learning project will fail if you forget through the journey that this is all about the person and not about the process.

He was in the early years of his career at Accenture as the international consultancy was in the midst of deepening its presence in India. He had been named the company’s first human resources director for India and was working around the clock to bring this fast-growing venture to life.

Born with severe bronchial asthma, Varma’s condition worsened as Accenture expanded its India footprint from 200 people in 2001 to an astounding 40,000 employees by 2008. Having already suffered two bouts of asthma during this time, he experienced a third event while visiting New Delhi — collapsing in the midst of a meeting during the final attack.

Colleagues rushed a passed-out Varma to the hospital where he went into cardiac arrest. Varma said he was gone for two minutes before regaining consciousness.

“The reason I’m alive today is because of my Accenture colleagues. My association with Accenture and with our people is much deeper than what might appear at the surface,” said Varma, who today is Accenture’s talent and learning officer.

His commitment to Accenture and his passion for developing talent are such that he’s never backed away when the company presents him with a new endeavor. Varma started with Accenture straight out of school in his home town of New Delhi, then to Mumbai, India, and on to Singapore before landing in New York. He has chosen to stay open to new ideas and ways of doing things, he said. Alongside that journey, he’s led the creation of learning and development programs intended to drive Accenture forward.

Driving efforts like Varma’s at a company that employs 401,000 people takes boldness and unrestrained thinking, said Accenture Senior Managing Director for Talent Strategy Nate Boaz. “Rahul does all of this with humility and courage.”

Innovations in Learning and Talent

For Varma’s part, the chance to create opportunities for people and helping them do what they love is what has sent him from one country and one challenge to another. “From the very first day until almost 23 years later, that very purpose hasn’t changed,” Varma said. “But there’s a lot more clarity to it and there’s a lot more shape and form to it.”

In creating Accenture Connected Learning, he sought to strike a balance between the advantages found in employees’ off-site learning and training and what he calls “learning all the time.” Whether through an in-person classroom or by way of an online application, multiple environments were needed. ACL, which was launched in 2015, includes physical classrooms that are virtually linked to one another across Accenture’s training network. In each classroom, tables are also “connected” to one another to facilitate learning and collaboration. ACL also includes Pinterest-like online learning boards that enable employees to access expert-curated information on different topics. On top of that are more than 100 professional communities for people based on work, skill and project area.

He was leading learning when in 2014 the company began grappling with its performance management system that he said had outlived its utility. “It was demotivating,” said Varma. In recent years, the effectiveness of traditional performance management practice has been widely challenged. Issues range from inconsistency in implementation and a lack of clarity in expectations and metrics to the infrequency of critical performance discussions between managers and employees.

“Imagine if your Fitbit only gave you a step count at the end of the year — there’d be no motivation to enact change or improve,” said Kris Duggan, CEO of performance management software company BetterWorks and an expert in the space. “When companies transform their performance management process to become more feedback driven, it’s motivating for employees and allows the organization to stay agile and productive over time.”

A growing market of companies like BetterWorks that specialize in performance management tools reflect the transformation at hand. So does a growing list of companies that includes IBM, Google, GE and Adobe that have reimagined their systems.

At Accenture, Varma’s team kicked off its journey to a new performance management approach with a two-month research sprint to find out what created great individual and team performance. From that, five basic truths about performance surfaced, Varma said:

“Workers see the ability to progress and grow in their career as a reason to stay at an organization long-term,” Duggan said.

Creating Performance Achievement, Accenture’s new take on performance management practice, required a number of key elements, Varma said. The company’s roughly 100,000 supervisors and leaders had to be trained on engaging employees through strengths-based conversations and real-time feedback. This meant that thousands of people took a one-day training course led by expert faculty and other leaders in strength and engagement. What’s more, the company’s HR professionals would have to undergo a fundamental shift in their approach — moving from being administrators of a performance management process to architects and coaches of the Performance Achievement approach. To quickly roll out the program, Accenture would have to create its own applications. Varma said the team used the iterative agile methodology to develop the software needed.

“All of this can fail if you forget through this journey that this is all about the person and not about the process,” he said. Broken into three components — focusing on employee strengths and goals, team work, and development actions for individuals — the program was launched to the company over the course of 2016.

The new Learning Center in India, slated to officially open in Bangalore, India, during the spring of 2017, has been in the works since about 2014, Varma said. “This is not going to be a center where people will get great learning or better learning or continuous learning,” he said. “The real purpose of the center is to make a better learner.”

In conceptualizing what the center would include and do, Varma’s team traveled to Silicon Valley and Japan for inspiration. The team met with experts to hear about advances in technology and neuroscience. It also sought out insight into the use of space, learning from concepts like Zen minimalism and ancient Indian Vedic texts on learning. Taken together, the research would translate into an environment where, Varma said, “every inch of space would be a learning space.”

The center includes four connected classrooms, 16 surface hubs to allow people to connect and work together, writable surfaces in all directions to facilitate further collaboration, a broadcast studio to share content, a human performance and learning space, and areas where workers can quietly reflect on their work.

Varma said the pitch to leadership for the learning center was pretty straightforward. Because the work of Accenture is engaging clients and co-creating with them, its workforce needed to constantly stay up to speed in a range of areas. But with change happening fast, keeping every piece of content current is nearly impossible, said Varma.

“If you create a continuous learning culture and you create an infrastructure, which is centered around the human being — which they can access when they want, where they want, how they want — you will actually be able to equip people with the ability to have high learning agility,” he said.

Varma credits the learning and development organization’s ability to chart new areas in learning and performance innovation to a clarity of purpose and high involvement by the company’s leaders.

“Driving change — it can’t be HR-led, it has to be business-led,” Varma said. “It has to be led by top leadership of your company.”

When it came to the Performance Achievement program, for instance, Varma’s team showed the executives what they’d be introducing to workers by giving them first-hand experience with the program’s components. Leaders completed the strengths profile that employees would be asked to take. They also defined their individual priorities and met as a team to discuss them and exchange feedback.

“If it’s not role-modeled by our business leaders, it will never come to fruition,” he said.

Varma’s education isn’t in learning or development specifically, but his career has prepared him for the path his work has taken. The experiences accumulated over time with Accenture, like wrestling with complex talent challenges in India, enabled him to reimagine how the company did learning. Experience taught him to be inventive, open and quick on his feet.

Varma remembered a call he received one evening while working in India more than a decade ago. It was the head of technology asking Varma’s team to ramp up its recruitment efforts. While this division had previously been recruiting about 100 people a month, 500 people would be needed in five weeks.

“You can imagine my reaction. And he wasn’t joking. He was serious,” Varma said. There’d been a surge in client demand and “this was one of those big moments of can Accenture actually do this?”

His team rallied around the challenge. Varma met with peers for advice. He even reached out to his business-school alma mater Symbiosis Institute of Business Management in Pune, India, asking the director for help.

“ ‘What I’m going to ask you is going to seem very, very bizarre,’ ” Varma said recalling the conversation in which he asked for students to help.

He would ultimately collaborate on the technology department’s request with a peer who had a background in recruiting. Together they examined how to apply supply chain and distribution principles to recruiting. Varma said the supply chain-based model they created for that pressing recruitment need is still used in some parts of Accenture today.

“No textbook tells you to do these things,” he said. The journey is often about necessity being the mother of invention. “It requires doing crazy and wild things that haven’t been thought about before.”

The journey has also required personally stepping into the unfamiliar. As Accenture’s talent needs evolved, Varma had to pick up, move and start over in a new place. Starting over would mean leaving India, where he enjoyed deep relationships with friends and family, and moving to Singapore, where he knew no one.

“But over time I began to feel more and more a part of the fabric of the society,” he said. When Varma was asked to lead learning for Accenture in 2011, he and his wife, Preeti, who is an artist, would move again, this time to New York. A commitment to his field of work and the company spurred him on, in spite of what initial difficulties he experienced in assimilating to new environments.

“The reason I chose HR in the first place was this was the one discipline, if you will, that has the ability to help people unlock their potential in the context of an organization,” Varma said. “So as I’ve done this, I’m now living in my fifth city and third country in Accenture and have just been very blessed and very privileged to have lived and worked in different cultures and just learned a hell of a lot along the way and made many, many good and strong friends all over the world.”

Good, strong friends and colleagues who have literally been life-savers.