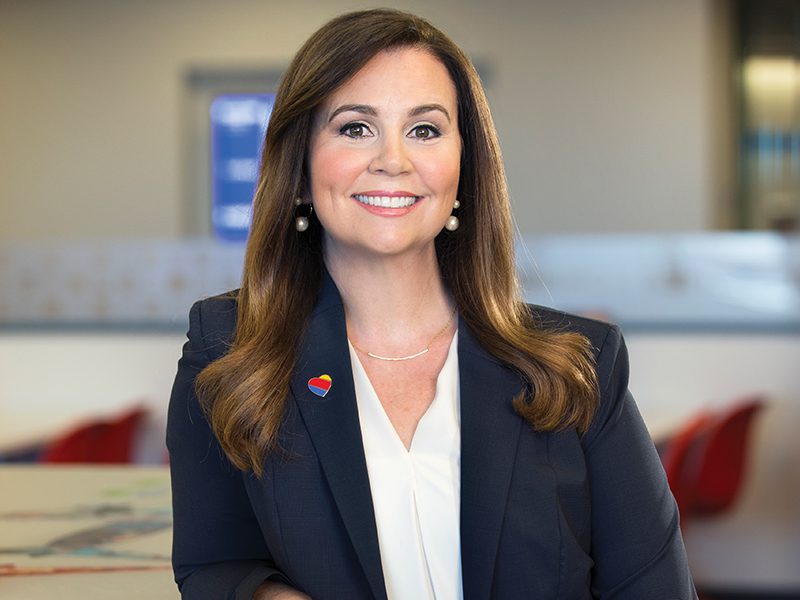 Southwest Airlines’ Elizabeth Bryant cares. She enjoys solving problems and helping others. While she doesn’t like to talk about what she does for her peers, they do.

For instance, Jeff Lamb, executive vice president of corporate services at Southwest, recalled how Bryant jumped into action following news that a fellow employee’s husband had died. Bryant volunteered to go to her home with a few colleagues to clean and help out over the course of several days.

This was one of many times that he saw Bryant respond personally to employee needs, he explained, and it’s not a talent strategy. It’s simply who she is. Her compassion and earnest interest in Southwest employees’ concerns has won a “fierce” loyalty from her team, Lamb said.

Bryant, vice president of Southwest University since 2012, describes herself in more straight-forward terms. For example, as a child, her report cards said she talked too much. And if ever there is a problem, she said family and friends will confirm that she is often somewhere in the middle of solving it. This same problem-solving attitude is top of mind when she talks about leadership and her team: “If I come to the table and don’t participate in solving a problem, then why am I there?” A unique perspective is often necessary to move the conversation along and get things done, she said.

When Bryant arrived at Southwest in 1997 fresh out of graduate school at Indiana University-Bloomington, she came in as an instructor, teaching new hire and leadership classes. She intended to gain some experience and return to the Bay Area, where she is from. But then she began to move up. She served as director of leadership development, as senior director of talent and development, and as managing director of training during Southwest’s learning overhaul.

In 2011, Bryant found herself in the middle of a learning dilemma that Southwest had been managing for decades. The company’s acquisition of AirTran Airways that year had magnified challenges associated with its decentralized training model. Every operational group across the company had its own training function, but there was little consistency, resources weren’t used efficiently, metrics were limited, and there was little room to support company growth, she said.

The company could have stayed the course as it brought 8,000 new employees on board from AirTran, but Bryant said it chose to rethink how Southwest Airlines learns: to improve training quality and continuity, decrease costs, improve efficiency and deliver learning to employees faster.

The move to centralized learning was a significant shift in SWA’s history and is a point of pride for Bryant. The challenge was great, considering more than 400 training professionals across the organization were training differently, using different methodologies, platforms and skills, while managing different learning management systems.

To help assess the work that lies ahead, she said one of the first things she did was improve employee onboarding so she would know who was coming into the learning organization and what they were doing. “I believe strongly that when you get the right people in the right seat, then you can accomplish anything.”

Bryant sat down with each training department and met with each employee one on one. There were a lot of pointed questions such as: How did you get here? Why learning and development? She said she was trying to find out whether instructors were in their roles on purpose or by accident.

“Because if you don’t want to be here, I want to help you align with where you want to be,” Bryant said. Anyone in this department has to feel passion for helping other people be successful. That’s what this department is all about.”

In retrospect, Bryant said these were likely surprising conversations for some of the staff, but the meetings were important so she could get to know the learning team, they could get to know her, and she could immediately establish an environment that was open, transparent, honest and geared toward problem-solving.

This yearlong preliminary work helped Bryant highlight values she wanted to imbue into the Southwest University culture, and identify key support needed for instructors who’d been so consumed with teaching they’d neglected their own development. The Southwest learning team created an internal certification to improve instructors’ skills and built a community to bring them together.

To further understand the company before its learning function underwent any major change, Bryant moved out of the HR office into the airline’s inner-workings to learn all about its operational training, interacting regularly with every department — ground operations, tech ops, flight crews, customer support and services — as a team member. These experiences allowed her to examine the function in detail: what was working, what wasn’t and what were the disparate, best practices from 10 departments that could be brought under one roof to benefit the broader workforce.

Things ran as usual during this period. Bryant said she wanted to take time and make this front-end investment so the learning team could get this consolidation to a centralized university governance structure at least 80 percent right pre-launch. They could tweak as needed, but there would be no do-overs.

By 2012, all training groups had been onboarded into Southwest Airlines University, or SWA U. Learning changed, as well. Some program titles changed, and in 2014, the team moved into SWA U’s 492,000 square-foot, $120 million Training and Operational Support, or TOPS, building in Dallas.

In 2015, the 300-employee SWA U team trained more than 47,000 employees, as well as 10,000 global contractors using methods such as classroom-based learning, e-learning, video, blended solutions and performance-based training depending on the work group and location. “The sense of pride is evident throughout the department,” Bryant said.

She said during one team meeting, she interviewed an employee she’d never met before who was looking for another job. They discussed all the ideas he had to improve the business, ideas that were constantly met with resistance — there were “operational objectives” that had to take priority and no time to consider anything else — and he wasn’t being heard. The employee shared his idea to use tablets in classrooms. Considering tablet computers weren’t a technology the company had been using, there was a lot of risk but the idea was worth looking at. “I said, ‘You know, I actually think mobile learning and that type of thinking is the future of learning,’ ” Bryant said.

The two eventually worked on a business case together, and the employee became the champion of SWA U’s iPads-in-the-classroom initiative. Where once the department would print off a customer service training manual that was easily 100 pages long — out of date the moment it landed in employee hands and pitched in the recycling bin soon after class — now materials can be emailed and accessed digitally. The tablet initiative was so successful it was eventually embedded into how business is done at SWA U.

In the past three years, welcoming new ideas has become part of the culture. The aforementioned employee, having put aside his job search, is now one of the most engaged employees she knows, Bryant said.

“I have an expectation that every employee in this department acts like a CLO of the company and makes decisions accordingly,” she said. “And I’ve found that a highly engaged workforce is one that believes they are able to participate in the process; it yields happier employees.” And happier employees provide better service.

Southwest’s voluntary turnover rate is less than 2 percent companywide. Bryant said within her department, that rate is even lower, and it’s likely because of her transparent, uber supportive leadership style. This kind of approach not only drives performance, but also affects employee retention, wrote leadership expert Monique Valcour in a January 2014 Harvard Business Review article. “No one wants to work for a boss who doesn’t take an interest in their development, doesn’t help them deepen their skills and learn new ones, and doesn’t validate their contributions,” Valcour wrote about strategies similar to Bryant’s.

And just as her team has built a community and strategy for learning leaders’ continuous development, Bryant, who is an avid reader, continues to build her own development and share what she’s learned. Last year, she delivered a SWA U talk on engaging millennial workers to roughly 1,000 leaders. These talks are similar to TED Talks, designed to be short and informative.

Bryant is no stranger to standing before a group and talking about the business, but this opportunity was different. She couldn’t use her usual videos or visual aids to solicit engagement, so to mitigate her discomfort, Bryant began preparing five months in advance. She tapped her colleagues for guidance, and when it was time for a run through, she brought in all of the learning leaders to provide feedback. It took an army, she said, but she welcomed it.

“When you create an environment of debate, dialogue and trust, you get it back,” she said, laughing. “I had more suggestions for improvement than I care to list.”

However, all of the feedback created a much better product. She said the SWA U talk was probably one of the biggest learning opportunities she had recently, and “I’m OK if I never do that again —although, you never know,’ she said. “I’m always up for the challenge.”

She said her life outside of work rarely sees a dull moment. A mother of three extremely active children — Connor, Regan and Audrey — Bryant’s weekends are filled with tennis, soccer and cheerleading practice. She’s involved as much as possible in her kids’ schools and volunteers where she is needed.

At Southwest, things are just as busy. Bryant said she’s had opportunities to learn and grow throughout her career, and she considers herself extremely lucky because the company’s mission aligns with her passion for learning, development and people. She said she hopes that every employee she interacts with comes away knowing she cares about them as individuals and cares about their career success.

Everyone brings gifts, she said. “Part of my job is to help highlight what those are — to listen, learn and highlight those.”