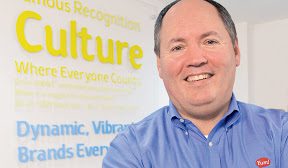 A Taste for Growth: CLO of the Year Rob Lauber

Rob Lauber never intended to be a learning leader.

After graduating in 1985 from the University of Scranton in Pennsylvania with a degree in communications and marketing, he began working at Dun & Bradstreet Information Services as a business analyst. Within a few months he was asked to teach his peers, and with little background in training he became the company’s divisional operations manager, responsible for hiring professional personnel and conducting training programs and performance reviews. The training industry wasn’t where he intended to go, but he realized it was where he wanted to be, and he hasn’t turned back.

“My passion is helping people be successful,” he said. “If you think about what learning and development is all about, it’s just that. Helping people do things that maybe they didn’t think they could do, or helping people realize and grow in ways they hadn’t up until this point.”

Since then Lauber has redefined Yum’s corporate university into a learning engine for both the company and franchise leaders globally. He has made programs more accessible through technology, more portable through field-based delivery and more globally consistent to reinforce the company’s culture.

Lauber said since the company’s spinoff from PepsiCo in 1997, themes such as “people capability first” have been at the forefront of everything Yum does. Similarly, the company has six principles that guide its mission, many of which center around employee development (See “Yum Dynasty Growth Model”).

“If you get people capability right, then you’re in the position to satisfy more customers, and then you ultimately make more money,” said David Novak, CEO of Yum Brands. “Too many companies start out with the idea but forget that the only way you can get there is by having the people who can really make it happen. Show me a good business, and I’ll show you a good leader. I’ve never seen a business stay good for a sustainable period of time without great leaders at the helm.”

Lauber said Novak’s commitment to learning makes his job easy, but with 39,000 KFC, Pizza Hut and Taco Bell restaurants in more than 130 countries and territories, it’s really not. For the past seven years he has served Yum’s 1.4 million employees consistent and tailored learning, and his secret ingredient has been his eagerness to visit restaurants and work directly with employees.

For example, in 2007 Lauber implemented a systemwide, single-source learning content repository, Learning Zone. This platform ensures learning at the restaurants is delivered in a consistent, efficient and effective manner. Now that it is live in more than 27,000 Yum restaurants, Lauber’s team has seen improved customer service and customer recommendations scores, as well as reduced training time and turnover as a result. Some of those results also could be attributed to Lauber’s direct involvement in monitoring their success. In the past year, he has visited several domestic restaurants and some in Vietnam, Moscow, Thailand and India to ensure learning technologies are effective.

Two years ago, while checking in with a restaurant in Singapore, Lauber asked the restaurant manager to launch a course through Learning Zone. He noticed it was taking a long time to run.

“We stepped back and asked ourselves where the bottlenecks were, because if that’s the experience in Singapore, which tends to be more connectively enabled, what might it be like in other places?” he said. “Being there and seeing it is a great catalyst to make sure we’re delivering the best experience we can for our employees. If there’s a connectivity issue, we work with local IT personnel to get it fixed. If we need to change the content, we go back to the drawing board. But I need to be there to notice these things.”

Pat Crull, chief learning officer at Time Warner Cable, said this passion and involvement is what has led to Lauber’s success.

“In the fast-food industry, you want speed, you want consistency and you want quality,” she said. “His approach to training offers those exact things. But it’s only half of what I think has made him advance the practice of learning and development. The other is his generous spirit of supporting the profession.”

Outside of Yum, Lauber has been passionate about helping learning professionals succeed and have more impact. He has provided peer support on learning strategies in companies including Comcast, Ford Motor Co., General Monitors, H&R Block, Marriott, Samsung, T-Mobile and UPS. He also has provided insights to several venture capital and private equity firms that were considering learning investments. From 2006 to 2009 he was on the national board of directors at the American Society for Training & Development, or ASTD, and was chairman in 2010. He is on the ASTD board selection committee and was chairman of the committee from 2010 to 2012.

“I’ve learned a lot from Rob over the years,” said Tamar Elkeles, chief learning offer at Qualcomm, who benchmarks her programs with Yum frequently. “He exemplifies leadership, is a good people leader and a good project leader. He is somebody the executive team relies on for business, knowledge and counsel, and someone the industry admires. He’s there for everyone and is seen as someone who’s helping develop the organization as well as develop the employees within it.”

Recently, Lauber has been leading conversations to consider how Yum can better support U.S. restaurant workers’ educational needs. With Taco Bell, he has led development of strategic alliances between Yum and educational partners that can offer degree programs, giving college credit for in-house training and job experiences as well as partners who can help those who have not finished high school — estimated to be some 30 percent of 400,000 U.S. workers — to complete their GED. Both approaches are aimed at improving the quality of life for Yum team members and providing additional career value. These programs are in a pilot phase now, but Yum University expects to take this further across other divisions in early 2014.

“Rob’s an avid learner and really cares about our employees,” Novak said. “When you have that, passion takes over and results follow.”

Rob Lauber’s responsibility is putting strategy and structure in place to enable common principles across the organization:

1. Believe in all people. Trust positive intentions and believe everyone has the potential to make a difference. Actively seek diversity in others to expand company thinking and make the best decisions.

2. Be restaurant and customer maniacs. Act with urgency to ensure every customer sees and feels appreciated in every restaurant.

3. Go for breakthrough. Begin by asking, “What can I do now to get breakthrough results in my piece of Yum?” Imagine how big something can be and work from the future back, going full out with positive energy and personal accountability to make it happen.

4. Build know-how. Pursue knowledge and best practices inside and outside the company. Seek truth over harmony every step of the way. Consistently drive outstanding execution by scaling learning into process and tools based on what matters most.

2010: Chairman of the ASTD board of directors.